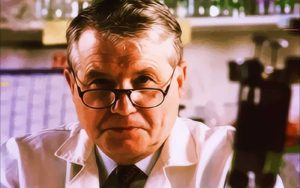 Dr. Luc Montagnier studied natural sciences at the University of Poitiers and received his license of sciences from the University of Paris in 1955. In 1960 he qualified for his doctorate in medicine at the same university. Dr. Montagnier became research director of the Centre National de la Recherche Scientifique (CNRS) in 1974 and in 1985 professor at the Pasteur Institute.

Dr. Montagnier is best known for his 1983 discovery of the human immunodeficiency virus (HIV), which has been identified as the cause of AIDS. This discovery led directly to the development of a test for detecting the presence of HIV in blood samples. Now his does research on memory of water.

Dr. Montagnier declares to have confirmed that DNA can be produced from its teleported “quantum imprint.” This is a finding that, were the scientific community to get on board, would represent “the most significant experiments performed in the past 90 years, demanding re-evaluation of the whole conceptual framework of modern chemistry,” according to theoretical chemist Jeff Reimers of the University of Sydney, Australia.

In the experiment, two neighboring but physically detached test tubes were placed within a copper coil and subjected to a very low frequency electromagnetic field of 7 hertz. The apparatus was isolated from Earth’s natural magnetic field so there was no interfering. One tube contained a fragment of DNA (around 100 bases long) and the second one contained nothing but water. After around 17 hours, the gene fragment (according to Montagnier) was recovered from both tubes, even though one should have just contained water.

➤ Check out the video about “Watre Menory” experiment done by Dr. Montagnier